Yesterday, I received a wonderful surprise in the form of an email from my Kentucky cousin Donald J. Stewart.  I had asked him some months ago if he knew who currently had possession of the family bible kept by Perlina Hall Reeves, wife of Sidney Preston Reeves of Ballard County.  I knew the bible existed because many years ago, before the availability of copy machines and scanners, my mother had seen it and transcribed some of the information.  At that time the bible was in the possession of Donald's aunt Bonita Reeves Hutcherson. 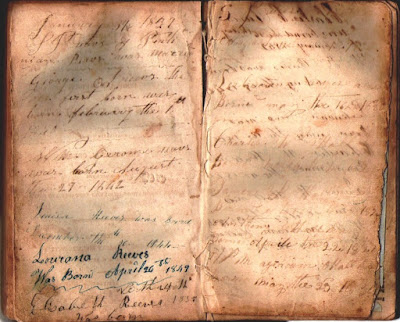 Dates of birth for Perlina Hall Reeves' siblings are also recorded in the bible in addition to Reeves' family members.  Ballard County's Charles Morgan Hall was a brother to Perlina and is named. 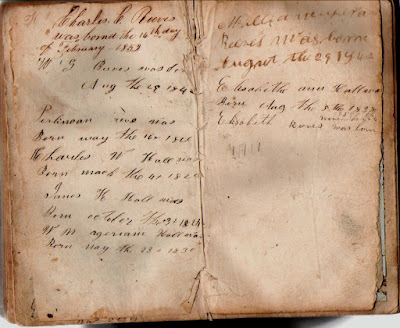 Although the birth dates of Perlina and Sidney Preston Reeves are recorded in the bible, the birthdates of the members of their family begin with their oldest son George Adam Reeves, born February 1, 1840.


Thanks so much to my cousin Donald for searching for the bible and scanning its pages to share with me.

Posted by Beverly Watson at 1:46 PM