When no documentation can be found in the historical records that verify the family histories, legends and online pedigrees of a family, I always find that troubling. As with so many other family lines, the truth of our Morgan ancestors is obscured with numerous stories and tall tales but there seems to be no historical record to support much of it. There is fairly reliable information on the majority of the children of Charles Morgan of Prince William and Fauquier Counties in Virginia, but much of the data online regarding sons Benjamin and John is suspicious. The fact that a dozen children were attributed to John Morgan and Martha Ann Settle who could not possibly have married until sometime after 1760, and only one possible child to Benjamin and Phoebe Settle Morgan is disconcerting. This has created persistent doubts regarding the accuracy of the history of this family as posted all over the web. 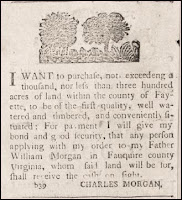 The legends appear to have begun in early 20th century family histories which elude to family bibles and old letters with no further documentation. The details of these bibles, letters and other documents are never available, and no scanned copies of the pages or letters are ever found online with these stories.

From the records of Fauquier County, it appears that Charles Morgan had several grandsons named for him. Charles, the son of Simon Morgan, was a Revolutionary soldier. He moved to Pennsylvania in 1804 where he died in 1808. Charles, the son of William Morgan, another soldier of the Revolution received large land grants in Kentucky. He settled in Fayette County for a time, later moving further west to Muhlenburg County where he died in 1822. Charles Morgan, who was documented as being killed in 1787 by indians during one of the many attacks on the Cumberland settlements of Middle Tennessee, has been believed to be the son of John Morgan and Martha Ann Settle. Finally, our ancestor Charles Morgan, born in Fauquier County in 1757 according to his Revolutionary War pension statement has been believed to be the son of Benjamin Morgan and Phoebe Settle although there is no evidence to support that claim. The two other sons of family patriarch Charles Morgan were Charles, Jr. who named no sons in his Culpeper County will of 1782 and James who left sons but none were named Charles. 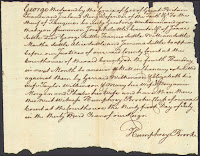 William, Simon and Charles Morgan, Jr. all left wills so their descendants are documented. That is not the case for Benjamin Morgan or his brother John. Benjamin is documented as marrying Phoebe Settle in various sources, particularly a chancery case where they were among the plaintiffs in a suit filed against other heirs of Isaac Settle and the executors of his estate. In both a writ and a summons from that case in 1760, Phoebe's sister Martha Ann Settle who is said to have married John Morgan and been the mother of his twelve children, was unmarried and named as Martha Settle in those chancery documents.

By 1775, Benjamin Morgan was described as a resident of the "Province of Carolina" in a deed for 300 acres in Little Fork in Culpeper County. The property adjoined Anthony Strother and several other members of the Strother family who were closely related to the Morgan family. In 1779, Benjamin Morgan, Charles Morgan, John Morgan and Isaac Morgan were listed as taxpayers in Capt. Allen's District of Wilkes County, North Carolina.

Although family lore says that John Morgan and his wife Martha Ann Settle were also residents of Surry or Wilkes County which was formed from Surry in 1777, there are no records to support that assertion. John Morgan witnessed the will of Benjamin Taylor in February of 1775 in Culpeper County. The myths surrounding this family have credited John with being the Capt. John Morgan of Surry County who served during the Revolution, but that does not appear to be correct. Capt. John Morgan's wife is recorded as Elizabeth (Betty) in two 1794 deeds where they sold portions of his original Surry County 400 acre land grant and he died in Stokes County, North Carolina (formed from Surry) in 1819. He was not killed by indians in Tennessee. There is nothing found thus far in the records of Wilkes County that would lead one to believe that John Morgan and Martha Ann Settle were living there during the time Benjamin and these Morgan children were.

In searching the records of Wilkes County, North Carolina, it becomes quite clear that Benjamin Morgan was undoubtedly the father of these young Morgan family members. They were all also born before Martha Settle could have married John Morgan which would have to have been after 1761. The only John Morgan in Wilkes County was the sibling of Charles and Isaac Morgan. Charles married Ann Hall in Wilkes County on 21 Jan 1780, Charity married Henry Gambill on 6 Oct 1778 and Alice married James Gambill on 24 Jul 1785. By 1782, Benjamin, and Isaac Morgan are the only Morgans of this family listed as taxpayers in Wilkes County, an unrelated Joseph Morgan was also listed as a taxpayer that year. Charles Morgan along with Benjamin and James Gambill witnessed a Wilkes County deed from Henry Gambill to William Clark on 10 Sep 1784 (Deed Book A-1 p.483). This does not agree with the Morgan legends which state that Charles and John Morgan arrived in the Cumberland Settlements of Tennessee with their father-in-law Major William Hall. In the last transaction by Benjamin Morgan on 2 Nov 1785 which was apparently before leaving North Carolina for Tennessee, he conveyed 140 acres in Wilkes County to James Coddell (sic Caudill). That deed makes reference to improvements to the property made by Henry Gambill and was witnessed by James Gambill (Deed Book A-1, p. 452). And most illuminating of all, a deed from Benjamin Morgan to William Johnson for 300 acres in Wilkes County written 14 December 1784 includes as part of the legal description of the land that Benjamin Morgan was selling, the phrase "along a line between Benjamin Morgan and his son Charles" (Deed Book A-1, p. 504). It should also be noted that the names "Benjamin" and "Phoebe" were used for the children of Isaac Morgan, James Gambill and other descendants.

The earliest records of the Cumberland Settlements of Middle Tennessee such as Ramsey's Annals of Tennessee written in 1858 and Early Times in Middle Tennessee written by John Carr in 1857 simply state - They (the indians) killed old Mr. Morgan, the father of Esquire John Morgan, who owned the fort near that place...They killed Captain Charles Morgan and old Mr. Gibson, near where Gen. Hall now lived...They killed Armsted Morgan, a brother of Captain Charles Morgan, and a fine-humored, well-disposed young man, while he was guiding through from "South-west Point" Captain Handly and a company of men for the protection of the Cumberland settlements. It is only in much later publications written more than 100 years after these events that "old Mr. Morgan" begins to be identified as John Morgan.


Benjamin Morgan is documented as being present in Sumner County by 1787 for that year he was listed as a delinquent taxpayer as was Armistead Morgan who had also been killed that year. The only John Morgan listed in these Cumberland Settlement census records is John Morgan, the son-in-law of Maj. Hall. In December of 1804 a public sale was advertised for 320 acres on Bledsoe's Creek which belonged to Benjamin Morgan. The property was taken to satisfy a judgment obtained by Winchester and Cage.

The result of all this research is that I have made no progress in finding the parents of our Charles Morgan who died in Warrick County, Indiana. However, I am now sure that he was not the son of Benjamin and Phoebe Settle Morgan since he had been living in South Carolina since 1775, and not in Wilkes County when the 1784 deed naming Benjamin Morgan's son Charles was written. A clearer picture of Benjamin Morgan is also emerging and the evidence suggests that he was the "old Mr. Morgan" who was killed by indians in 1787 but there are still many questions. If there really are bible records and other early documents in existence, it would be wonderful if they could be shared with other researchers in order to help find the truth of this family. What is the documentation for the marriage of John Morgan to Martha Ann Settle? If John and Martha didn't go to Tennessee, then where? We still need to learn exactly who the parents of the dozen children previously attributed to them were as well as countless other missing details of their lives.