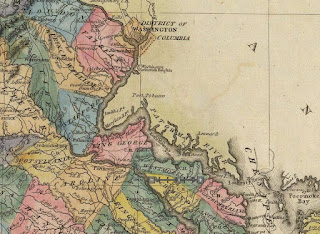 There is a copious amount of undocumented, inaccurate information floating about the internet regarding our ancestor Charles Morgan. After many years of searching Virginia's Northern Neck for some tidbit of documentation to identify the father of this ancestor who stated in his 1832 Revolutionary War pension application that he was born in Fauquier County, Virginia in 1757, I think I've finally found something of consequence.

The Benjamin Morgan and Phoebe Settle lineage which I spent years investigating proved to be incorrect. I shared the details of that research in a blog post five years ago. Benjamin Morgan was the son of Charles Morgan, born 1680 to Anthony Morgan and his wife Elizabeth. Charles' birth is recorded on the 28th of September, 1680 in Farnham Parish, Rappahannock, Virginia. Deed records in Wilkes County, North Carolina proved Benjamin's son Charles to have been incorrectly attributed to his brother John Morgan and couldn't have been our Charles.

The other most frequent theory found in countless sites on the internet is that he was the son of Anthony Morgan and Mary Wilson of Brunswick County, Virginia born 1764. Charles own words in his pension statement disprove Brunswick County as a place of birth and 1764 as a date. Anthony, born circa 1720 to 1730, was the son of Anthony Morgan, brother of Charles Morgan above, and Ann Duncan of Westmoreland County, Virginia. Like Charles, Anthony's birth is recorded in Farnham Parish, Rappahannock, Virginia on the 20th of November, 1686. Over the years I've frequently searched but could find no record of an Anthony Morgan living in Fauquier County, until recently when I happened upon the index of customers recorded in the Dumfries Store Ledgers of Prince William County.

Much research of this family is still yet to be done. In reviewing all the sites which list Anthony Morgan as marrying a Mary Wilson in Brunswick County, Virginia and most of his children having been born there, none of them cite any sources. The only Morgan I have been able to find historical records for in Brunswick County is a Robert Morgan 1726 through 1745. It is highly likely that Robert may be another of the children of Anthony and Elizabeth Morgan of Westmoreland County. The widow Elizabeth Morgan married John Ware after Anthony Morgan's death and Robert Morgan was listed along with his brother Anthony as sons-in-law (stepsons) in John Ware's 1704 will.

One of the primary online sites proffering Anthony Morgan's marriage to Mary Wilson and living in Brunswick County, Virginia is the SARRETT/SARRATT/SURRATT Families of America where I found the following citation - "In 1755, Anthony MORGAN III was appointed constable in the room of Lazarus Taylor." This cites the source as Ibid., O.B., 1754-1755, p 221 but makes no reference to the county where this is recorded. Research of Lazarus Taylor in northern Virginia indicates that he was a resident of Northumberland County who settled in 1744/45 on Marrs Run on land believed to be located in Hamilton Parish, Prince William County, which later became part of the newly formed county of Fauquier. If Anthony's appointment as constable was in the Fauquier area, it is further repudiation of the theory suggesting Anthony was living in Brunswick County during this period.

Our Morgan mysteries are definitely not resolved yet, but I believe that Anthony Morgan's listing in Daniel Payne's Dumfries ledger is a huge step toward finding Charles Morgan's lineage and ultimately our immigrant ancestor.

Posted by Beverly Watson at 5:13 PM