Jerman Wingo's parents, Thomas Wingo and Mary Holt Wingo died in Pittsylvania County, Virginia in 1828 and 1827, respectively. Shortly after their deaths, sometime in 1830, Jerman with his wife Ann, their three small children and his younger brother William Thomas Wingo left Pittsylvania County migrating to the newly opened territory of Kentucky west of the Tennessee River. They came west with Ann's parents Lewis Yancey Beadles and Martha C. Vaughan Beadles, and were joined by most of her siblings.

Aunt Molly Wingo Peal, granddaughter of Jerman J. Wingo, repeated stories she had been told as a child by older slaves of the family's migration from Virginia to Kentucky. The men herded the cattle while the female slaves and children herded geese and chickens as they traveled west through the Cumberland Gap to Kentucky. Jerman Wingo was an amateur horticulturist and they told her of his bringing fruit tree cuttings from North Carolina and Virginia to be planted in Kentucky.

For those who have traveled along this route even on modern roads, it is all too evident what a monumental task it must have been to travel from Virginia thru the Cumberland Gap all the way across Kentucky to the Jackson Purchase area in wagons bringing all their worldly possessions as well as livestock.

Within the next decade, Jerman's only other sibling, sister Lucinda with her husband George Bolinger and their family followed, migrating from Virginia to the Jackson Purchase.

Throughout the next 50 years, the Wingos, Beadles, Bolingers and other allied families such as the Slaydens developed prosperous farms and plantations on the Jackson Purchase land grants. The Beadles, Bolingers and Slaydens became involved in business such as banking and manufacturing in addition to holding public office. After Jerman Wingo gave right of way to the railroad as well as land for a depot, the town that grew there was first called "Wingo Station" and later shortened to Wingo.

During the Civil War, the effort to control the two great rivers, the Mississippi and Ohio, brought the presence of the Union Army to the Purchase. Ulysses S. Grant and the Union army captured Paducah which gave them control of the Ohio and the Tennesseee Rivers. Since the majority of the residents of the Jackson Purchase were southern planters and sympathized with the Confederacy, it was an extremely difficult time in the Purchase area. Many years later, Jerman's son, Elijah Willis Wingo told of their home on the Wingo Plantation having first been confiscated for use as a hospital and then later burned.

In a newspaper article from Denton, Texas in March 1930, Elijah Willis Wingo described the move from Kentucky in 1869 to Stephenville in Erath County, Texas. He said that in spite of the hardships of the 32-day trip to Texas and the dismal living conditions in the early days, it was not as bad as those they left behind in Kentucky after the Civil War. 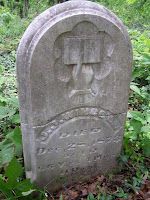 Jerman and Ann both survived the trials of the Civil War in the Jackson Purchase. Even after the losses of the war and reconstruction, the 1870 census lists Jerman's worth in real estate property at $8,000 and $4,000 in personal property. They raised their eleven children in Graves County and nine of the eleven survived them. Jerman died in Wingo, Kentucky in 1873 and Ann died there in 1879. Both are buried in the Greer Cemetery of Wingo, Kentucky with other early settlers to the Jackson Purchase such as the Plumlees and Bosticks.
Posted by Beverly Watson at 6:56 PM