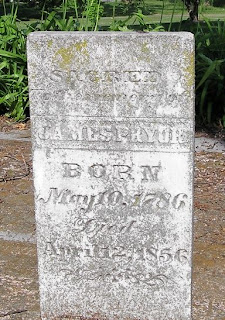 There has been much debate and discussion as to whether Jonathan and James Pryor were children of Richard Pryor and Mourning Thomson formerly of Albemarle, Virginia. The fact that Richard left no will when he died in Logan County in 1797 has contributed to the uncertainty. The only document recording his heirs is an 1811 Logan County deed wherein ten heirs sold their portion of a tract of 250 acres in Logan County to Jonathan Pryor. The deed specifically states that the sellers are the heirs of Richard “Prior”. It was common practice for legatees to sell their portions of an estate to one sibling but the problem with this deed is that it does not make an assertion that Jonathan was also an heir of Richard Prior.

Although there is no absolute proof of the parentage of James and Jonathan Pryor, there is an abundance of documentation of their connection to Richard and Mourning indicating that they were members of that family. Both James and Jonathan state that they were born in Tennessee on the 1850 census. Richard and Mourning Pryor are known to have been residents of Tennessee before December 1787 when Mourning was recorded as one of the charter members of the Big Pigeon Primitive Baptist Church in Cocke County. When James Pryor died in Graves County in 1856, Richard Pryor was listed as his father on his death record although the name of his mother appears to be something closer to Miriam. By the time Jonathan died around 1862, Graves County had suspended the practice of filing death reports so there is no similar record for him. In Graves County where both Jonathan and James lived the rest of their lives and raised their families, it is generally accepted that they were brothers and local histories identify them as such.

On the 19th of June 1800, Mourning Pryor married Thomas White in Logan County, Kentucky and the following Smith County, Tennessee deed confirms that she was Richard Pryor's widow:

10 May 1802 - Smith Co., TN Deed Book 1801-17 p. 94
Between Thomas White and Mourning White, formerly Prior (Pryor) admx. of Richard Pryor, decd of Logan Co., KY and James Ewing of Smith Co., TN...During the lifetime of said Richard Pryor, he bound himself in the penal sum of 200 pounds to execute a deed to William Pryor for 400 acres of land, his choice of 1280 acres part of 3000 acres lying on the Caneyford of Cumberland River, Mourning White (formerly Pryor) widow of Richard obtained letters of Administration of said decedent and said William Pryor has sold to James Ewing his rights to 200 of the 400 acres of land etc.

Five years after Mourning married Thomas White, on September 28, 1805, Jonathan Pryor married his youngest daughter Elizabeth. When Thomas died in 1806, he named Mourning as the executrix of his estate in his will dated 18 Mar 1805. She is recorded, as Mourning White, in Logan County tax records after Thomas’ death and in the 1810 census. Presumably she died sometime before 1820. Trips to Logan County to search extensively for more information have failed to produce any further record of Mourning or a gravesite. 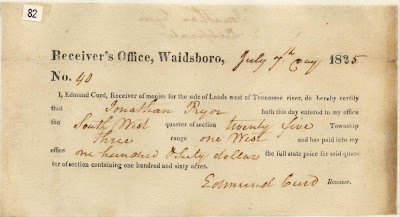 Jonathan and James Pryor with their young families left Logan County around 1820 moving further west into the newly opened Jackson Purchase. They reportedly first settled in Callaway County for a short time but by the 1830 census they were located in Graves County. Jonathan’s daughter Eustacia's marriage to Burrell Williams on April 15, 1824 is said to be the first marriage recorded in Graves County. The first grants west of the Tennessee River to Jonathan and James Pryor are both dated July 7, 1825. Over the next 10 years, there are additional grants totaling more than 3,000 acres to each of them.
Posted by Beverly Watson at 5:18 PM