Wyatt Wilkerson was the maternal grandfather of Sidney Preston Reeves and his brother William Harrison Reeves who settled in the Jackson Purchase around 1840 in the area that became Ballard County. Wyatt was born about 1740 in Virginia and his marriage to Mary Britt on 26 Dec 1765 is recorded in the Douglas Register of St. James Northam Parish, Goochland County. Mary was the daughter of William Britt and Hannah Connelly of Goochland County and is named as Mary Wilkerson in his 1787 will.

Based upon information from the 1807 will of Wyatt's brother, Joel Wilkerson, recorded in Logan County, Kentucky, Wyatt was originally from the southside of Virginia since he was described as being "of Prince George County, Virginia". Wyatt was named as the executor and primary heir in Joel's will which also mentioned possible legacies left by their father Frederick Wilkerson of Prince George County. ﻿﻿

The birth of Wyatt and Mary's first child, Sally, on the 25th of October 1766 is recorded in the Douglas Register as well as the births of Hannah in 1769 and Lucy in 1771. Sometime after 1771, Wyatt and his family left Goochland County and returned to the southside of the James River where he is listed on the rent rolls of Brunswick County in 1779. It appears that in 1779, Wyatt moved just south of the state boundary line between Virginia and North Carolina. There is a deed recorded in Granville County, North Carolina from Isaac Williams and Jesse Williams administrators of James Moore of Southhampton County, Virginia to Wiatt Wilkerson of Granville County on 3 Aug 1779 (Deed Book M, Page 174-175).

Wyatt and his family moved into the Granville County area and during the next 20 years, several other Wilkerson families settled there as well. There are numerous Wilkerson deeds recorded there in those years but no known family connection between them. In 1786, Wyatt purchased a tract of land on the north side of the Neuse River at the mouth of Knap of Reeds Creek. Knap of Reeds Creek would have flowed from the north into the Neuse almost directly across the river from William Reeves' land where Ellerbe Creek joins the Neuse River on the south side. Living in such close proximity it's possible that Betsy Wilkerson became acquainted with George Reeves prior to their arrivals in Madison County, Kentucky.
﻿﻿ 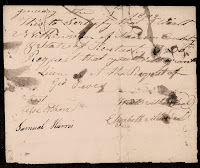 Wyatt left Granville in the late 1790's and is recorded in the 1800 census of Madison County, Kentucky and is also recorded as having been a resident at Fort Boonesborough. In Madison county sometime after the 1st of January in 1802 when the marriage bond was issued, Elizabeth Wilkerson and George Reeves were married.

In the course of the next ten years, Wyatt is also recorded on the tax lists of Wilson County, Tennessee circa 1804-1809. Additionally there is an 1809 suit "Harmon Hays, Plaintiff vs Wyatt Wilkerson, Defendant" in Tennessee that is over a land transaction. Harmon Hays was a land speculator in the Sumner/Robertson County area. It appears that Wyatt may have become involved in a land deal that went wrong. The names of numerous other Madison County settlers are also listed in those Tennessee tax lists. By 1810, Wyatt is once again listed in the census of Madison County, Kentucky which may indicate that he never actually lived in Tennessee, just purchased land there.

Before 1820 Wyatt and Mary Britt Wilkerson joined their daughters and their families - George and Elizabeth Wilkerson Reeves and John and Polly Wilkerson Thompson in migrating further west to Warren County, Kentucky where they are all listed in the 1820 census. Wyatt died in Warren County in 1821 and his will recorded there names his children as Elizabeth Reeves, Polly Thompson, William Wilkerson, John Wilkerson (deceased), Sally Searcy and Jesse Wilkerson (deceased) in addition to grandson Jonathan Parker, son of deceased daughter Lucy Wilkerson Parker.

Posted by Beverly Watson at 8:35 AM