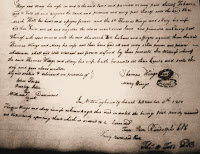 For many years there was great confusion because two Mary Holts married into the Wingo family. On the 23rd of November, 1783, Thomas Wingo's older brother William married Mary Holt. Obviously the Mary Holt born in 1778 was too young to have been the individual who married William in 1783 but this duplication of names confused many Wingo researchers for a very long time. The mystery was finally resolved by researching the Holt family. The Mary who married William in Amelia County in 1783 was found to be the younger sister of Shadrack Holt. When they married in 1783, her mother Mary Holt, widow of Richard Holt, gave consent for the marriage indicating that she was underage and born after about 1765. William Wingo's step-father John Foster signed the bond for the marriage.

As the county designations changed in the Amelia County area, William Wingo was found in the tax records of Prince Edward County in 1783 and after Nottoway County was formed in 1788, he was recorded in the tax records there in 1791. Sometime before May of 1792, Mary Holt Wingo, wife of William, died, for he married Fanny Shepherd in Prince Edward County on the 8th of May 1792. Shortly after their marriage, William, Fanny and the three young children born to he and Mary Holt Wingo, left Virginia migrating to Spartanburg County, South Carolina as his brother Obediah had done a few years earlier. 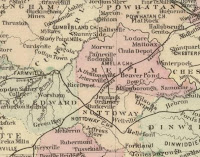 To add to the confusion caused by two Marys of the Amelia County Holt family marrying two Wingo sons, Ancestry.com's system has repeatedly listed "hints" suggesting a Mary Holt, daughter of a Samuel Holt and Mary Rowe of New Haven, Connecticut as a wife to Thomas Wingo. I just found that of 34 individuals in Ancestry with Thomas Wingo in their family trees, 15 of those 34 list Mary Holt of New Haven, Connecticut as his wife with one other listing her birth in Tennessee. For anyone interested in genealogy, an understanding of United States geography is a must.


There is a wealth of information regarding our Holt family who came to St. Mary's, Maryland by 1646 and from there spread into Virginia and other southern states at the Holt Family site - A Journey to Christmasville.
UPDATE - I'm sorry but that wonderful Holt site has disappeared from the internet. If anyone is interested in more information on the Holt family, please email me.

Posted by Beverly Watson at 2:26 PM