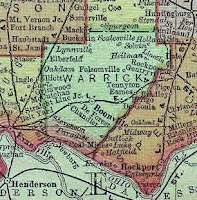 Charles Morgan, grandfather of David Hall and Charles Morgan Hall of Ballard County, is the subject of much speculation and conflicting internet theories. The most factual information available about him comes from the 1832 statement given in Warrick County, Indiana when he filed for a Revolutionary War pension. In that document, he states that he was born around 1757 in Fauquier County, Virginia.

Much of the conflicting information on the internet originates from the SARRETT/SARRATT/SURRATT Families of America website which would have us believe that this Charles Morgan was the son born circa 1864 in Brunswick County, Virginia to an Anthony Morgan and Mary Wilson. Note that there is no Anthony Morgan recorded in tax lists and other records of Fauquier County. This information does not agree with Charles Morgan's own statements given in his 1832 pension statement and does not appear to have any basis other than proximity due to both individuals living in the area of York County, South Carolina. There were several Charles Morgans in the area around York County and no documentation that deferentiates between them. 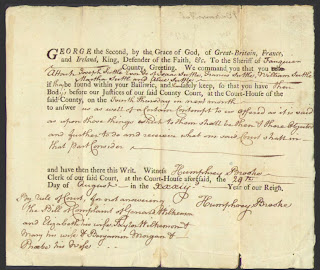 Charles Morgan's pension application states that he was residing in York County, South Carolina in 1775 when he volunteered to serve in a militia company. His first service for about three months was in the command of a company of which he was Lieutenant, after which he received a Captain's commission from the Governor of South Carolina. He recalled that he served for three years without intermission. Most of his service was in the command of General Lacy, under whom he had entered the service. He remembered being involved in several skirmishes and a battle of Createn Springs.

He remained in South Carolina for about twenty years after the Revolution, then moved to Kentucky around 1800. There were other members of the Morgan family of Fauquier County, Virginia living in the Logan County area of Kentucky including widowed Phoebe Settle Morgan but that may have no bearing on his choice of the location when settling in Kentucky. He is found in deed records of Logan County in the early years of the 19th century and it is there that his daughter Polly married Archibald Lovelace in 1802. By 1810, he was recorded in Butler County in the census of that year. In neighboring Ohio County, his daughter Susannah married David Hall in 1812 and in Butler County in 1819, daughter Edith Ann "Edy" Morgan married Adam Hall.

It was these daughters and their husbands who came to the Jackson Purchase soon after it was opened for settlement and are all found there by the 1830 census as well as David and Adam's brother James who had married Betsy Lovelace. Charles Morgan's wife, Lorena Arnold, the mother of his older children died in Kentucky about 1816. He married again to Nancy Dixon in 1817 and before his death, he married a third time in 1830 in Warrick County to Mrs. Nancy Camp. He died sometime not long after giving his pension statement on the 18th of September 1832 in Warrick County, Indiana.

This is a lineage that may benefit greatly from the new autosomal DNA projects. It may finally be possible to connect our Charles Morgan to the family of Charles Morgan of Rappahannock or prove that he descended from another of the many Morgan families of colonial America. Autosomal DNA testing could also provide further clues to maternal lines.
Posted by Beverly Watson at 6:55 PM