Adam Clapp, Soldier of the Revolution

Adam Clapp, the ancestor of the Clapp families of the Jackson Purchase, was the grandson of George Valentine Clapp (Klap) and Anna Barbara Steiss who immigrated from Germany, sailing from Rotterdam on the ship James Goodwill, arriving in Philadelphia on September 27th, 1727. Thanks to the records of the German Reform church now known as the Brick Church founded by George Valentine and his brother John Ludwig Clapp in Guilford County, North Carolina (current Alamance County), this family is extremely well documented.

Adam was born on 10 Dec. 1754 to John Phillip and Barbary Clapp in Orange County, North Carolina. In addition to the records of the Brick Church, Adam applied for a Revolutionary War pension on November 13th, 1832 in Union County, Illinois, providing more information regarding his life and Revolutionary War service. In his affadavit for that pension, he stated that he was living in Guilford County when he first volunteered for service during the Revolution under Capt. Henry Whitesell in the fall of 1776 or 1777. During his first tour of duty they marched to the Cherokee Nation where, along with South Carolina troops and Catawba Indians, they were engaged in a battle. After marching back to Salisbury, they were discharged. 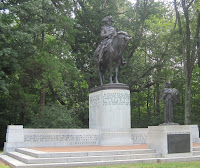 He recalls during subsequent tours of duty, once serving again under Capt. Whitesell at the Guilford Courthouse guarding the public ammunition. When serving under several other commanders on tours after that, they were primarily pursuing the Scotch and Tories in North Carolina. It was after one of these pursuits that they returned to Guilford Courthouse because the British were located there. Joining the main army, they were placed under the command of Gen. Nathaniel Greene. Their arrival at Guilford Courthouse was on the day after the battle took place and they then pursued the British army which was retiring toward New Bern until they were dismissed to return home.

Sometime around 1780, Adam married Emma Ruth Marley daughter of Adam and Rosanna Marley. In his pension statement he says that he moved to Tennessee about five years after the Revolution. By around 1785, Adam is found in the records of Sumner and Robertson counties. After the Revolution, many of North Carolina's soldiers received bounty land grants in Tennessee which was then part of North Carolina.

In Tennessee during the 1790's, Emma Ruth died after which Adam married Ruth Lawrence. He was still living in Robertson County, Tennessee in August of 1804 when he was recorded as serving on a jury there, but by 1807, he and his family had moved to Union County, Illinois. Legend has it that they traveled to Illinois on the Cumberland, Ohio and Mississippi Rivers.

Adam died on August 15th, 1841 and is buried in Union County, Illinois at St. John's Lutheran Cemetery in Dongola. Many of Adam's children remained in Illinois, some migrated to Texas where they were found during the Republic of Texas but the oldest son of Adam and Emma Ruth, John Isaac Clapp, settled in Graves County, Kentucky.