For a very long time, descendants of Lewis Yancey Beadles of Graves County, Kentucky and descendants of Basset Beadles who settled just south of Graves County in Weakley County, Tennessee have been searching for their origins. Karen Frazer who descends from Basset has been working with her own family members and descendants of other Beatles families to encourage male family members with the Beadles surname to participate in Y-DNA testing at Family Tree DNA. In the last week Karen has shared the matching Y-DNA results of a descendant of Basset Beadles to a descendant of James Beadles of Louisa County, Virginia who was the uncle of our ancestor Lewis Yancey Beadles of the Jackson Purchase. To add to these great results, there was also a descendant of Edmond Beadles whose DNA matched. Edmond Beadles was initially from Louisa County and also migrated to Kentucky. 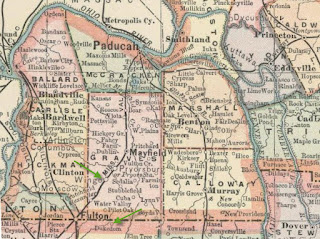 Both Lewis Yancey Beadles and Basset Beadles were born in Virginia and migrated to the Jackson Purchase area shortly after it was opened for settlement arriving in May and June of 1830. Lewis Yancey Beadles received his first land grant from the Bureau of Land Management on the 31st of May 1830. Less than a month later on the 17th of June 1830, Bassett Beadles and his son William both received grants all of which are recorded in Kentucky's grants west of the Tennessee River.

The map of the Jackson Purchase area above points out Wingo, Kentucky where Lewis Yancey Beadles received six (6) sections of land adjoining the section granted to his son-in-law Jerman Jeduthan Wingo for whom the town derived it's name.

Basset's first land grant in 1830 was in the area of Cuba, Kentucky to the southeast of the town of Wingo where Lewis Yancey Beadles had settled. Within the next few years Basset moved further south and is recorded in Weakley County, Tennessee in 1840. The town of Dukedom in Weakley County is credited with having been named for Basset's son Duke.

During the 1850's Basset's son William was also a resident of Graves County, Kentucky where he was the County Clerk. William's two sons, Alfred and Marshal, became physicians and Dr. Alfred Beadles practiced in Wingo, Kentucky. 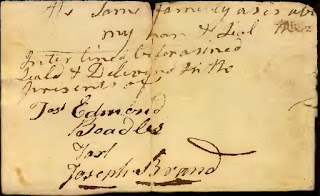 It has been speculated that these Beadles' families may have been related but until Karen received the Y-DNA results, there was nothing more than proximity to connect the two families of the Jackson Purchase. Since he was listed on the tax lists of Louisa County, proximity is also the only thing to connect the third matching Y-DNA tester's probable ancestor Edmund Beadles to brothers James and William Beadles.

There were two Edmund Beadles of the same era, one living in King William County who was a Revolutionary War soldier and brother to Joel Beadles. That Edmund does not appear to have ever left the Tidewater area for his Revolutionary War pension statement given in 1834 states that he was at that time a resident of King William County and had always been. I had initially believed that a small scrap with Edmund Beadles' signature as a witness in the file of a Louisa County chancery suit involving William and his brother James Beadles was the Edmund Beadles who migrated to Pittsylvania County and subsequently to Kentucky, but recently discovered that he signed with an X on several deeds in Pittsylvania which indicates that the signature is not his. This second Edmund Beadles who is believed to be the ancestor of the third Y-DNA tester is recorded on the tax lists of Louisa County along with brothers William and James Beadles. In 1782, Edmund or Edmond was listed on the tax lists there but by 1795 he was apparently living in Pittsylvania County for he is listed on their tax lists of that year. In 1788 he was joined by Rice and Seaton Beadles on those Pittsylvania tax lists. Two deeds dated 1797 that name him along with wife Unity indicate that they were selling their property in Virginia prior to migrating to Kentucky. By August 16, 1800 Edmond and Rice Beadles were listed on the tax lists of Lincoln County, Kentucky. The third DNA tester descends from John Beadles who married Priscilla Harralson in Person County, North Carolina around 1792 and is believed to be a son of Edmond. Person County is just below Pittsylvania County on the Virginia-North Carolina border. John was still recorded in Person County in the 1800 census but within a few years, he had settled in Mercer County, Kentucky adjoining Lincoln County.

This by no means solves all of the mysteries of the Beadles of Virginia's Tidewater region, but these Y-DNA results are an important discovery in regard to the research of the Beadles families of Virginia and has proven that they were very closely related. All three of the Beadles' descendants whose Y-DNA matched are extremely close genetically, matching on 109 of 111 SNP markers.

If you are a male Beadles' descendant with the Beadles surname, please consider participating in the Y-DNA project at Family Tree DNA and further adding to our knowledge of these families.