The name Hall is extremely difficult to research since there are so many different Hall families and our information for William Hall, the father of our ancestor Adam is so scant. If Adam's sons David and Charles Morgan Hall had not been profiled in Kentucky: A History of The State, by W.H. Perrin, J.H. Battle & G.C. Kniffin, published in 1885 we would not have known who his parents were. Thanks to that book with a collection of biographies contributed by individuals still living at the time, we know that Adam's father was William Hall, a soldier of the Revolution, and his wife was Abigail King, both of Virginia.

After my recent searches of the records of Logan, Butler and Ohio counties, I am convinced that William Hall, husband of Abigail King, died soon after his arrival in Kentucky. The older William Hall of the 1797 tax list may have been him but all of the other listings in the Logan County tax records for a William Hall appear to be William, husband of Margaret Neely. By the 1820 census of Ohio County, Abigail had apparently remarried and may have again been widowed for she is listed as the head of household with the surname Hunter, living in the next residence to those of sons James and Adam Hall.

The 1807 tax lists of Logan County list James and David Hall, each over 21 years of age and with 50 acres. They are listed again in 1808, James with 30 acres on Deer Lick Creek and two other tracks that appear to be rents from individuals named Haws. David is not listed with land in this list but does have three horses. In 1808 younger brother Adam is also listed as under 21 years of age. In both of these years, the Hall sons are listed just below a Peter Hunter which would indicate that they made the trip to the courthouse to pay their taxes together. This raises the question as to whether it was Peter Hunter to whom widowed Abigail Hall was married prior to the 1820 census.

The family was counted in Butler County, Kentucky in the 1810 census. It appears that William Hall was definitely deceased by that year for the 1810 census lists son James as the head of a household that included a male child under 10 years old, 2 younger brothers, 6 sisters (possibly 5 sisters and James' wife) in addition to two older females each over 45 years of age. In 1811 both James and David were listed on the tax lists in Butler County. Again in 1812 they were listed there and joined by younger brother Adam showing a total of 230 acres on the waters of Muddy River. By the census of 1820 the Hall family was found in Ohio County. That census records Abigail Hunter as the head of household with sons James and Adam living in the next residences. David is also present in Ohio County but listed separately. 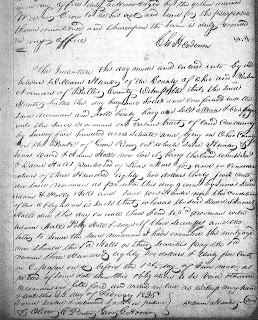 Adam married Edith Ann "Edy" Morgan, daughter of Charles Morgan and Lurena Arnold (Arendell) on 1 December 1819 in Butler County, Kentucky. His brother David had married Edy's sister Susannah, another of Charles Morgan's daughters, on the 19th of October 1812. All 3 Hall brothers had been listed on the tax lists of Ohio County, Kentucky with land along the Green River in the records there prior to 1820.

It appears that Abigail King Hall Hunter passed away sometime around 1823 for the last tax list that records her in Ohio County was 1822. William Hunter may have been a son or brother of Abigail's second husband. He was obviously of some relation to Abigail's deceased husband and is recorded as a party to various deeds in conjunction with James, David and Adam Hall. One of those deeds even states that it was the land where Hunter, James, David and Adam Hall then lived. Presumably these deeds are in effect selling the lands left to them by their mother, Abigail Hunter, but the intent is not made clear in any of the deeds. In February of 1826 there are several deeds executed by William Hunter who appears to be signing as security on notes or mortgages by the Hall children, Adam, David, James and Polly (Mary) in Ohio County.

After an intense several weeks of research on this Hall family, I still have more questions than answers but at least I've learned a little more about the family. I've also had some significant autosomal DNA matches that could eventually connect our Hall line back several generations. One of the most interesting appears to be DNA matches to an Adam Hall originally of Massachusetts who settled in Adair County, Kentucky bordering Logan. The name of the patriarch of several generations of that family was Adam, which, in conjunction with the DNA match, could be noteworthy. For now this will have to be enough, but the search to find William Hall's origins will continue.

Posted by Beverly Watson at 7:53 PM