James Brock Pryor was born in Graves County, Kentucky on the 25th of July, 1844. He was the son of William Pryor and grandson of Jonathan Pryor who settled in the Jackson Purchase shortly after the land west of the Tennessee River was acquired by President Jackson from the local indian tribes and opened for settlement around 1825.

James married Nancy Margaret Harper in Graves County around 1868 but the marriage record appears to have been lost when the Graves County Courthouse burned in 1886. Sometime before 1880, they joined James' parents and other family members moving to northern Texas where they are recorded in Grayson County in the 1880 U.S. census. After William Pryor's death there in 1890, the family returned to the area east of the Mississippi River, settling in Memphis where James was a barber.

There are no childhood photos of James' older daughter such as those included in Part 1 of his youngest daughter Esther. In fact, the only mention of her was an Effa Pryor born in Kentucky circa 1874 listed in the 1880 census. There are no other census with this child listed but she is found as Miss Myrtle Pryor in the 1898 Memphis City Directory in James Pryor's home. These photographs, such as the one below which identifies her as Esther's sister with her husband finally solved the mystery of her existence. The Wahl family lived and raised their children in Paducah, Kentucky. 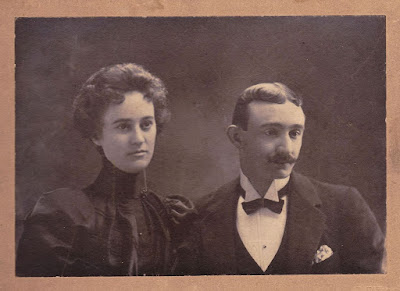 Alberta was the granddaughter of James Brock Pryor. Born on the 10th of October, 1904 to Esther Lillian Pryor and her husband Opie Reid Cullins.


One more post to come with the balance of the photos from this album. Part 3 - Friends & Family of James Brock Pryor will be coming soon.