The search for the origins of our ancestor Charles Morgan who died in Warrick County, Indiana in 1832 has been ongoing for many years. The internet is full of theories of supposed family lineages none of which are verifiable. After participating in an autosomal DNA project several years ago, one of my primary goals has been to identify the location of our Morgan DNA by chromosome and segment. Until recently I had found no matches that appeared to descend from our Charles Morgan but several weeks ago, I found two descendants of his son Anthony who match my DNA and that of my two first cousins from this lineage on Chromosome 4. Once these Morgan descendants were identified, an entire block of matches that had previously been complete mysteries became probable candidates as descendants from either the Morgan family or an allied maternal lineage. This listing shows matches to myself and my cousins with the segments and size of the match as well as a notation of any known ancestral lines. 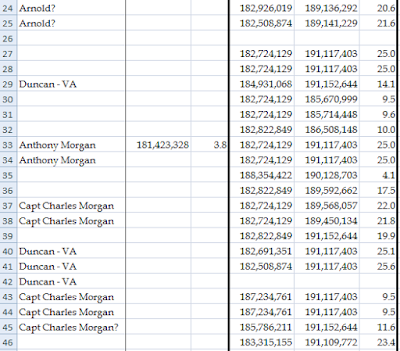 In a statement given when applying for a Revolutionary War pension, Charles Morgan stated that he was born 1757 in Fauquier County, Virginia and was living in York County, South Carolina by 1775 when first called into service. One of the most common theories is that Charles Morgan who died in Warrick County, Indiana was the son of Benjamin Morgan and Phoebe Settle of Fauquier County, Virginia who migrated to Wilkes County, North Carolina around 1770 and eventually to Tennessee where they died. A thorough search of the records of Wilkes County has produced proof that Benjamin's son Charles was still living in Wilkes County, North Carolina in 1780 when he married Ann Hall on the 21st of January 1780. This Charles Morgan has been identified in countless websites and family pedigrees as the son of Benjamin's brother John Morgan and Martha Settle, however, the deed records of Wilkes prove that to be incorrect. A 1784 deed from Benjamin Morgan to William Johnson for 300 acres includes as part of the legal description of the land that Benjamin Morgan was selling the phrase "along a line between Benjamin Morgan and his son Charles" (Deed Book A-1, p. 504). Various sources had identified all of the younger Morgan individuals in Wilkes County as children of John Morgan and Martha Settle, but there is no record that John Morgan ever lived in that county. The Capt. John Morgan who served in the Revolution from Surry County, North Carolina was a completely different person and never migrated to Tennessee, dying in Stokes County, North Carolina (formed from Surry). See a previous post regarding documented information for Benjamin and John Morgan along with errors in the online family pedigrees for the Morgan family in Sumner County, Tennessee.

In reviewing any lineages that could be found for the individuals who are matches on this segment of Chromosome 4, besides the two who descend from Charles Morgan's son Anthony, one appears to descend from Anthony Morgan of Brunswick County, Virginia and four are from Duncan families which may be related to the family of Ann Dunkin or Duncan, wife of Anthony Morgan (II) and mother of Anthony Morgan of Brunswick, Virginia. It has been suggested that Charles Morgan, born 1680, married an Ann Duncan but no reliable sources have been located for that assumption.

I am in hopes that more matches on this segment of Chromosome 4 will be forthcoming and can eventually definitely identify Charles' family. If you're reading this post, are a descendant of this Morgan family and have participated in an autosomal DNA project, drop me a note in the comments. And if you've uploaded your raw DNA data from Ancestry, 23andMe or FtDNA to GEDMatch where we can compare matches that would be excellent.

Posted by Beverly Watson at 6:10 PM