Joseph Pryor, Sr., son of Samuel Pryor and Prudence Thornton, settled in Bourbon County, Kentucky by 1810 when he was recorded in the census of that year. He had previously lived for some years in Botetourt County, Virginia where he is listed each year as a taxpayer from 1783 until 1792. By 1800 he is found on the tax lists in Woodford County, Kentucky before his move to Bourbon. Woodford County was formed from Fayette County in 1788 as was Bourbon in 1786. By 1810 Joseph was recorded in the census of Bourbon County. He wrote his will there on the 30th of December, 1812 and by February Court of 1813 he was deceased when his will was presented for probate.

There is much speculation on possible family connections between the various Pryor families who settled in Kentucky and Tennessee after the American Revolution although at present nothing has been found to document a connection. Joseph Pryor used some of the same given names that are common in our Pryor family of the Jackson Purchase descending from Richard and Mourning Thomson Pryor such as William, Joseph, John and Richard but we have no documented proof to connect the families. My two first cousins and I have numerous autosomal DNA matches to descendants of Joseph in Ancestry's DNA system but it is not as reliable as Y Chromosome DNA tests. The participation of Pryor individuals who descend from our Richard Pryor who died in Logan County, Kentucky in 1797 is needed to truly confirm the relationship.

Recently in the course of searching the wonderful collections of original documents at Family Search, I found scans of several original documents by Joseph Pryor and his sons which include their signatures. Original signatures are a great benefit to genealogical researchers especially since early American colonial families favored ancestral names and used the same given names repeatedly. It's wonderful to have scans of these signatures that help identify various individuals.

This 1810 consent to the marriage of his daughter Prudence to Robert Hall was signed by an elderly Joseph Pryor just two to three years before his death in early 1813. The consent also includes the original signatures of his sons John, Richard and Edward Pryor as witnesses. 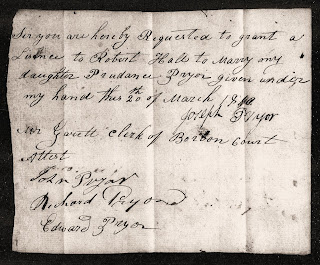 Another interesting document found at Family Search is the following bond executed by Joseph Pryor (Jr.) and his brother John in November of 1815 to the Commonwealth of Kentucky when requesting a license to allow Joseph to keep a tavern in his house in Bourbon County. 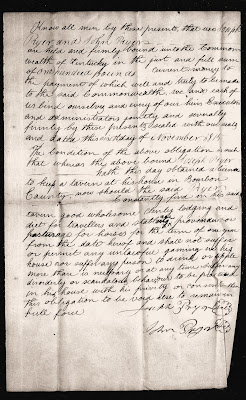 If you're a male descendant of Richard Pryor and Mourning Thomson with the Pryor surname, please consider participating in the Pryor Y-DNA Project.

Posted by Beverly Watson at 3:24 PM