A Step Forward in Beadles Research

For many years, Beadles' family researchers have been trying to find some documentation that would link our ancestor William Beadles of Louisa County, Virginia to other Beadles' families. There were numerous individuals living in Virginia in the late 18th century whose ages and geographic locations suggest that they may have been siblings but no documents to support that conclusion could ever be found.

The births of several of the older children of William Beadles and his wife, Ann Yancey, are recorded in The Douglas Register of St. James Northam Parish in the 1780's and during this same period, the births of children of James Beadles and his wife Susannah "Sukie" West are also recorded. Both William and James Beadles are listed as taxpayers in Louisa County in 1782 and in that year, another possible sibling, Revolutionary War soldier Edmond Beadles is also listed as a taxpayer in Louisa County. 1783 tax records in neighboring King William County record James Beadles and another likely brother, Joseph Beadles. It has always seemed that surely these individuals must be brothers or at the very least cousins, but in the end, the only connection between them was proximity which is never credible evidence of kinship. 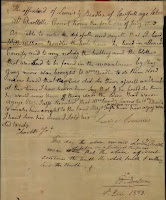 As the Library of Virginia continues to add more scanned documents to their Chancery Suits Index, I occasionally return to their website and again search for Beadles in Virginia. This week to my great surprise, I found a Louisa County court case - Wm. & James Beadles vs Achilles Tandy, Admr. of Wm. Tandy dated 1804 but pertaining to events that took place during the late 1780's. As I read through the 59 pages of original documents, I finally found on the second page of an affidavit by William Thomson proof of the relationship between William and James Beadles. William Thomson stated "James Beadles informed him that his brother Wm. gave three bonds of Fifty pounds each for the purchase of Wm. Tandy's land..."

Finally there was proof of one sibling relationship between these Beadles. A statement by Lewis Yancey Beadles regarding events at his father William's plantation in Albemarle County in the late 1780's further confirmed that this was the correct Beadles family. Another small document torn from a larger one which appears to be a 1786 deed, had the signature of Edmond Beadles as a witness linking him to this court case along with William and James.

After 30 years of searching, we've finally taken a step toward finding the family of William Beadles. As with so many other genealogical mysteries, the answers are probably going to be found in the minute details of Albemarle, Hanover and any of the other adjacent counties whose records have survived wars, courthouse fires and other disasters.

Posted by Beverly Watson at 3:39 PM