DNA Matches Among My JP Families

This week the results of my recent DNA test have begun to show in Ancestry. There is currently no new information and nothing that will solve any lingering mysteries, but there have already been many matches to Jackson Purchase families where valid historical documentation already exists.

Numerous matches to Clapp descendants have already been identified including this match between William and Mary Clapp, children of John Isaac Clapp and Sarah Loy ~ 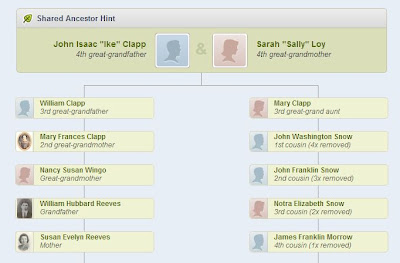 Also a match to the previous generation George Loy and Mary Catherine Tillman, the parents of Sarah "Sally" Loy ~ 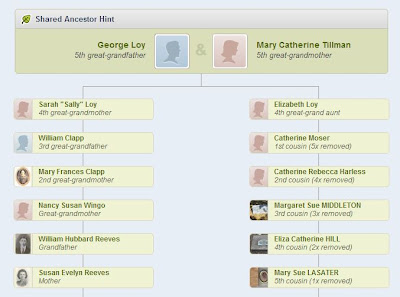 A Wingo family match links Thomas and Sarah Wingo of Amelia County, Virginia to their sons Thomas Wingo and his brother Obediah who migrated to Spartanburg County, South Carolina after the Revolution. Thomas Wingo was the father of Jerman Jeduthan Wingo of Graves County ~ 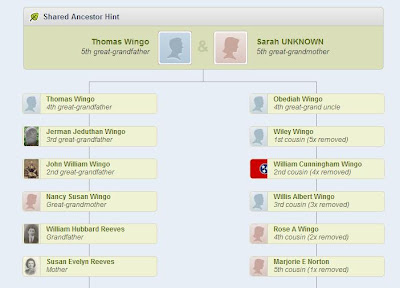 Marilla Pryor, wife of James Rodgers Cargill, of Graves County has always been considered a daughter of Jonathan Pryor and Elizabeth White although there are no historical records to confirm that relationship because of the courthouse fire that destroyed Graves County's earliest records. Now a DNA match to Eustacia "Stacy" Pryor for whom there is historical documentation, confirms that Marilla was descended from Jonathan Pryor ~ 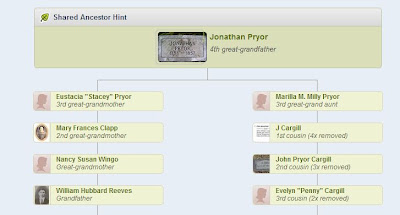 And finally, a match to Susannah Mary Pryor Newby confirms the long held belief that Jonathan Pryor and his brother James of Graves County were the children of Richard Pryor and Mourning Thomson of Virginia who migrated first to Tennessee and lastly to Logan County, Kentucky. In the past there has been much debate, discussion and some disbelief that Jonathan and James were truly the children of Richard and Mourning Pryor. Susannah Mary Pryor's husband, Henry Newby, was named among the heirs of Richard Pryor in a Logan County deed of 29 Nov 1811 wherein Richard Pryor's heirs were selling a tract of land to Jonathan Pryor whose relationship was unstated. (Logan County KY DB C:467-469)

I'm looking forward to many more interesting matches and hopefully a few new revelations as the matches continue to arrive.

Posted by Beverly Watson at 1:04 PM