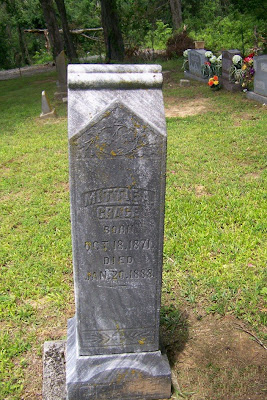 Arminta "Mittie Ann" Grace was the daughter of Richard Grace and Lorenna Antonette Wingo of Graves County, Kentucky. She died at the age of seventeen and is buried in the Camp Beauregard Cemetery outside of Water Valley, Kentucky.

Camp Beauregard was originally a Confederate training camp during the civil war. During the six months that it was an active military installation it was decimated by diseases such as pneumonia, typhoid fever and meningitis. By the time the camp was evacuated on March 1, 1862, 1000 confederate soldiers who had never engaged in battle were dead. The United Daughters of the Confederacy placed a large memorial there at the site of a mass grave of those soldiers.

In subsequent years, it has been a public cemetery and used by the families of the community. There are local legends that the site is haunted, but I have personally never encountered any malevolent spirits there. It's a lovely quiet hilltop with a view of the surrounding countryside.