What became of Curtis Reeves' Children? 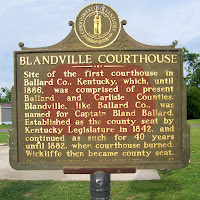 The only marriage record that can currently be found for Curtis was to Eliza Bryant in Paducah on March 31, 1841. Eliza was around nineteen years old at the time but Curtis had been born in 1807 and was 34. It seemed reasonable to believe that Curtis was married prior to this 1841 marriage but none of the repeated searches of Kentucky marriage records produced any record.

Recently, I happened upon a listing in the McCracken County census of 1840 that had been incorrectly transcribed as Curtis J. Reares. The original census document could be construed as "Reares" but is actually Reaves. The household consisted of 2 males under 5, 1 male 5-9, 1 male 10-14, 1 male 30-39, 2 females 5-9, 1 female 10-14 and 1 female 30-39. Sidney Preston Reeves had married Perlina Hall in 1839 and they are listed in the same community on the next page of that census. So, obviously Curtis Reeves was married before he married Eliza Bryant in 1841 and had seven children with that first wife.

In the course of again attempting to find a record of that marriage and the identity of Curtis' first wife, I didn't find a marriage record, but did find a reference to his first wife Delilah Doolin. Curtis is named as Delilah's husband when the children of William Doolin of Butler County were listed on an 1833 deed selling William Doolin's land to Jesse Lee. Delilah's brother Archibald Doolin also moved to McCracken County after their father's death for he is recorded in that 1840 census living a few households from Curtis. Another brother, George W. Doolin, migrated to McCracken County as well, dying there in 1839.

Delilah appears to have died sometime in late 1840 and Curtis then remarried in March of 1841. Within the next few years, Curtis and Eliza had two sons both born in Blandville in Ballard County - Benjamin born in 1843 and William H. in 1844. By the 1850 census Curtis was deceased and Eliza was living across the river in Mississippi County, Missouri and remarried to an Edward Fleece. According to Goodspeed's 1888 Mississippi County biography of William H. Reeves, Curtis Reeves died in Wayne County, Missouri in 1845.

Curiously the seven children of Curtis and Delilah Doolin Reeves cannot be found in either Kentucky or Missouri. One possible child of Curtis' is a 16 year old George Reeves living in the household of William Harrison Reeves in Ballard County's 1850 census. Also found in the home of Sidney Preston Reeves that year is a female child listed simply as "J. Reeves" around age 8, who may be one of Curtis' children. If they are Curtis' children, that still leaves five missing children who seem to have disappeared into the Jackson Purchase.

Posted by Beverly Watson at 9:17 AM