Charles Morgan Hall, the son of Adam Hall and Edith Ann Morgan, married Mary Elizabeth Wingo, the daughter of Jerman J. Wingo and Ann Beadles so I am related to that family through two different lines. My grandfather referred to them as being his "double cousins".

Charles M. Hall's grandfather was Charles Morgan who served as a militia Captain in South Carolina during the Revolutionary War. His other grandfather, William Hall was also reportedly a soldier of the Revolution but since the name William Hall is far too common in revolutionary records, no one has confirmed his service to date. Charles Morgan applied for a RW pension in 1832 in Warrick County, Indiana but died soon after his statement was given. Thankfully he did make that application before his death because there is information contained in it that would never have been available otherwise. That will probably be material for another post. 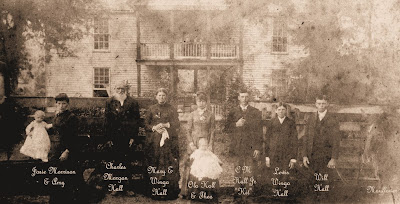 Charles' father Adam Hall was a keel and flat boatsman on the Mississippi River, trading in pork and salt, but after steamboats came into existence, in 1837 he quit boating and purchased 366 acres of land just across the Mississippi River in Missouri. He resided there on his farm at Cape Girardeau till his death in January of 1849.

As a young man, Charles Morgan Hall had also piloted flat boats down the river to New Orleans. After Adam Hall's death, he brought his mother and the younger children back to Kentucky where he had the care of the family. In 1856, he married Mary Elizabeth Wingo, a young widow, who had previously been married to a William Hall who was said to be of no relation. C. M. and Mary Elizabeth Hall raised their eight children not far from Blandville in Ballard County, Kentucky.

According to information published in 1885 by Battle, Perrin & Kniffen in Volume I of Kentucky: A History of the State, C. M. Hall was a leading farmer and fine stock breeder. Charles Morgan Hall died on the 28th of January 1895 and Mary Elizabeth Wingo Hall died on the 10th of November 1911.

(Thanks to Charles M. Hall descendant, Jay, for the wonderful photo above.)
Posted by Beverly Watson at 11:48 AM